Take The Guesswork Out Of Public Speaking Anxiety 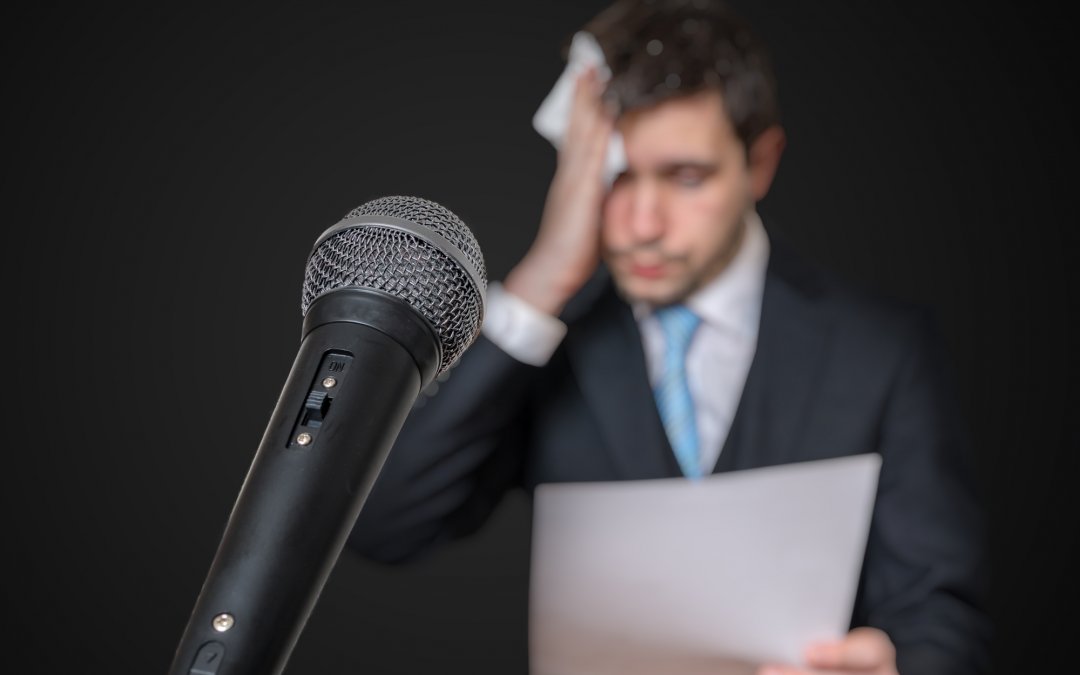 The funny thing about presenting and public speaking anxiety is that the majority of people will tell you they don’t enjoy it and/or aren’t very good at it. And yet regardless of who they are and what they do, most of the speaking they do on a day-to-day basis IS public speaking.

You see, mostly when we talk to ourselves we keep it as an internal dialogue that nobody else can hear. But whenever we open our mouths and actually make a noise in front of another person we’re speaking …

The funny thing about presentations and public speaking is that the majority of people will tell you they don’t enjoy it and/or aren’t very good at it. And yet regardless of who they are and what they do, most of the speaking they do on a day-to-day basis IS public speaking. There’s a word for public speaking anxiety and it’s called: “Glossophobia”. It’s estimated that as much as 75% of the population struggles with public speaking anxiety to a certain degree. That means some 238 million people feel nervous about talking to others. 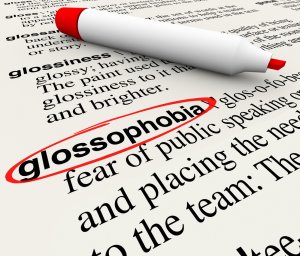 You see, mostly when we talk to ourselves we keep it as an internal dialogue that nobody else can hear. But whenever we open our mouths and actually make a noise in front of another person we’re speaking in public – hence “public speaking”. So why do so many people have public speaking anxiety?

I think it’s the eyes. All those sets of eyes fixed on you….. BORING into you. It’s unsettling. So would it be any easier if your audience was ignoring you and all looking the other way? What if they all dozed off so it WAS as if you were talking to yourself? (Have you ever been a Rotary after-dinner speaker?)

Whatever the reason, the fact is that before getting up to speak, even the most seasoned professional will have some butterflies, whether they choose to call the feeling nervousness or excitement doesn’t really matter. Rest assured, we all experience fear to some degree.

If I had one tip to pass on, if I was asked to tell you the most important lesson I’ve learned over the years I’ve been giving speaking presentations, it would have to be to stress the absolute necessity of being totally prepared.

Now this may sound obvious and I’m sure you’ve heard this before, possibly many times, and like a lot of important messages it tends to become diluted the more we hear it “Oh yes, I knew that, now what else?”.

And yet, knowing this, some people will be outside in the car park seconds before they have to deliver their sales pitch scribbling it out on the back of a business card. I know, I’ve been there.

KNOW YOUR SPEECH BY HEART

When I talk about being prepared, I mean you should know your talk by heart. You should be able to give it verbatim, standing on your head, without even having to think about what comes next.

But actually, that’s not what happens. In effect, the opposite is true. When you know your talk by heart, it gives you the freedom to change it around. You can add or subtract without losing your direction. It’s like driving from A to B. If your route is set from the outset and you know it well, you can safely veer off and browse in a few antique shops and have a pub lunch in a picturesque village off the beaten track and still get back to where you were to complete your journey. But, if you’d just set off in the general direction with no main route to which to return, you’d soon get lost if you were to be diverted and you’d have difficulty picking up that thread again.

Now some of you may be thinking:

There are so many things out there that can throw the speaker, and lots of unexpected things can occur when you’re dealing with the public. No matter how good you are, you will become distracted, so knowing your material is absolutely crucial.

Let’s face it, we all get nervous. We all known to stick our feet in our mouths sometimes. But prepare, prepare and over-prepare and not only will you enjoy the confidence of knowing that nothing can phase you because you know your material, but if you’re forced off your chosen route for any reason you can return smoothly and appear to be the consummate professional speaker.

And after all, if you can’t – or won’t – speak about your business, who will?

Deborah Northcutt is the CEO of www.FreeYouUpVA.com.  I am a Speaker Support Consultant who helps new and aspiring speakers find their ideal speaking opportunities. I help free you up to speak so that you can make more money and live the life that you dreamed of.